About 30 years ago Sound Sculpture saw an opportunity to take a good idea and make it great. We wanted to design a system that went past the traditional switching system. Starting with our PEP-3, the MC-8, then the Switchblade-16 our products evolved into the current Switchblade line, fine tuning the system with each iteration to get us to our goal of offering the ultimate guitar effect switching system.

Although there have been a few attempts recently by some manufacturers to try and expand beyond the traditional switching system, these systems still fall far short of what the Switchblade series has achieved.  Here is a look at how the Switchblade does what it does and what other features it offers.

The heart of the Switchblade is the matrix. It’s a simple and elegant idea.  The matrix allows the Switchblade to connect anything to anything.  This includes splitting an input to several outputs and mixing inputs together giving you the power to connect your gear any way you like. 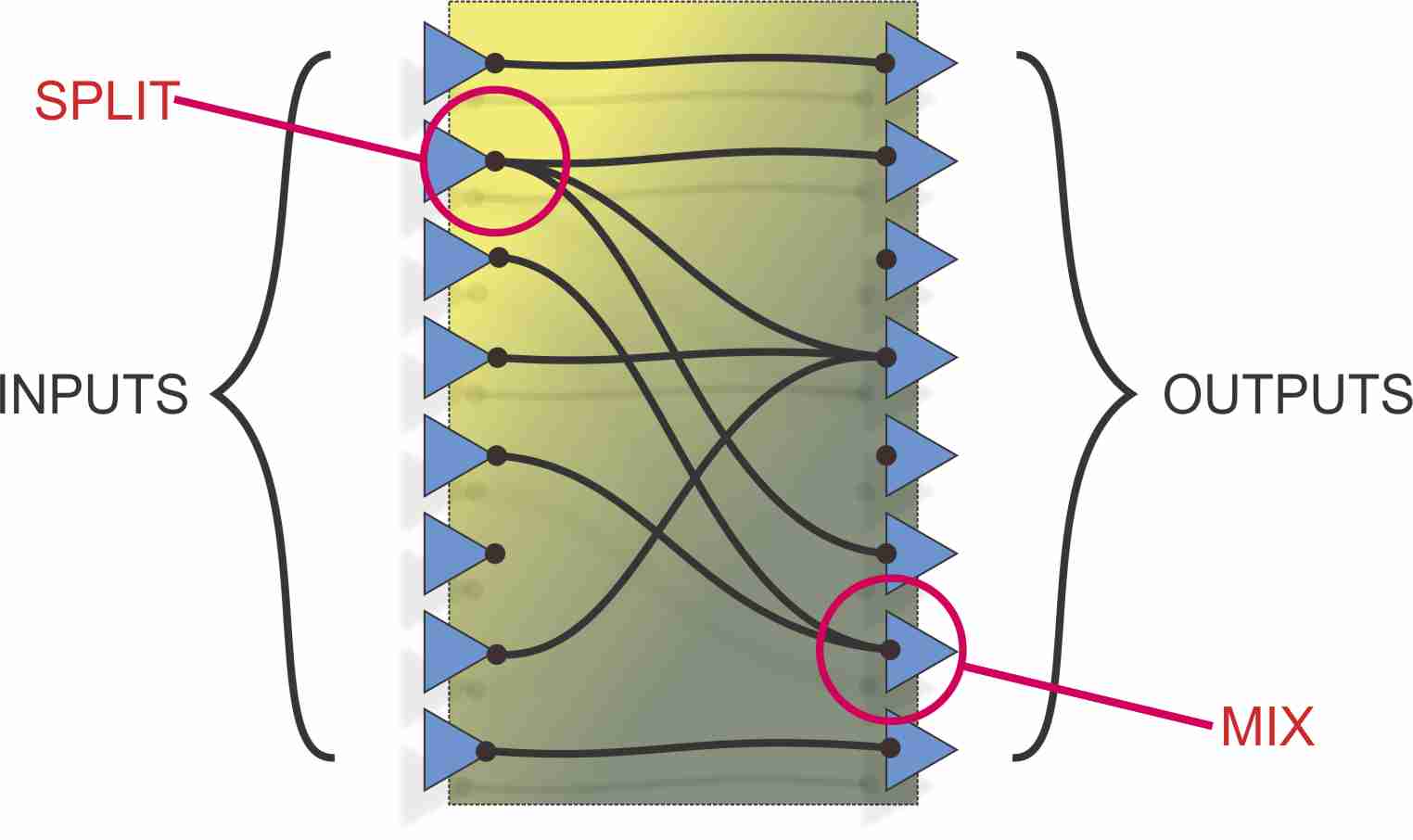 The Switchblade is a preset based system meaning the connections in the matrix change, resulting in a complete rewiring of your gear when you select a preset. And with our Smart Insert feature you can even make changes within a preset and we'll cover this later.

For example, imagine a simple system with just a guitar, an amp, two effects, and the Switchblade.  You can create a preset to tell the matrix to connect your guitar directly to your amp with no effects involved.  You might select this preset by pressing a switch on your MIDI foot controller. Here is an image of the connection we want and what happens in the matrix to achieve it. 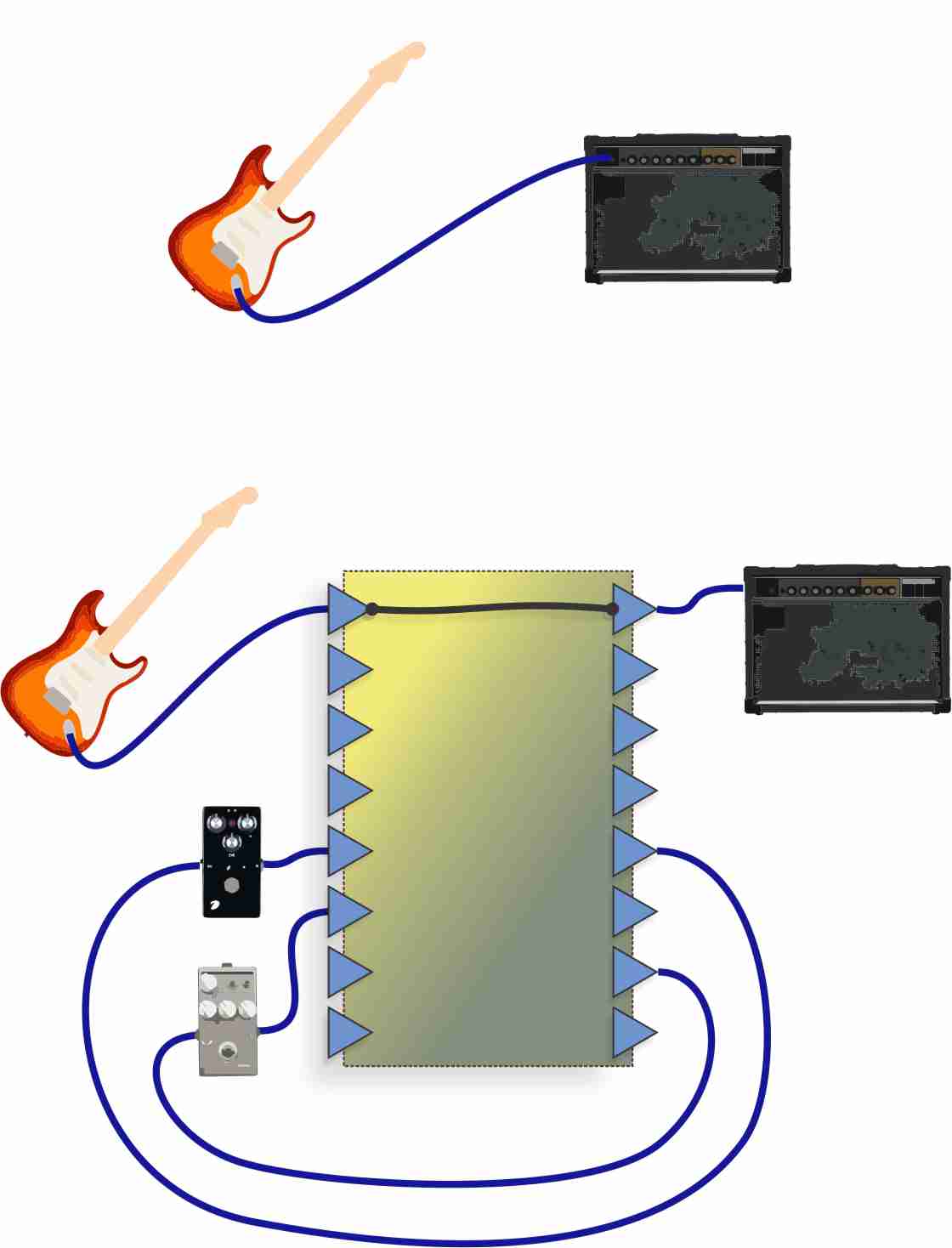 Press another switch on your foot controller and this might select a preset creating two connections in the matrix as shown here resulting in routing a single effect between your guitar and amp. 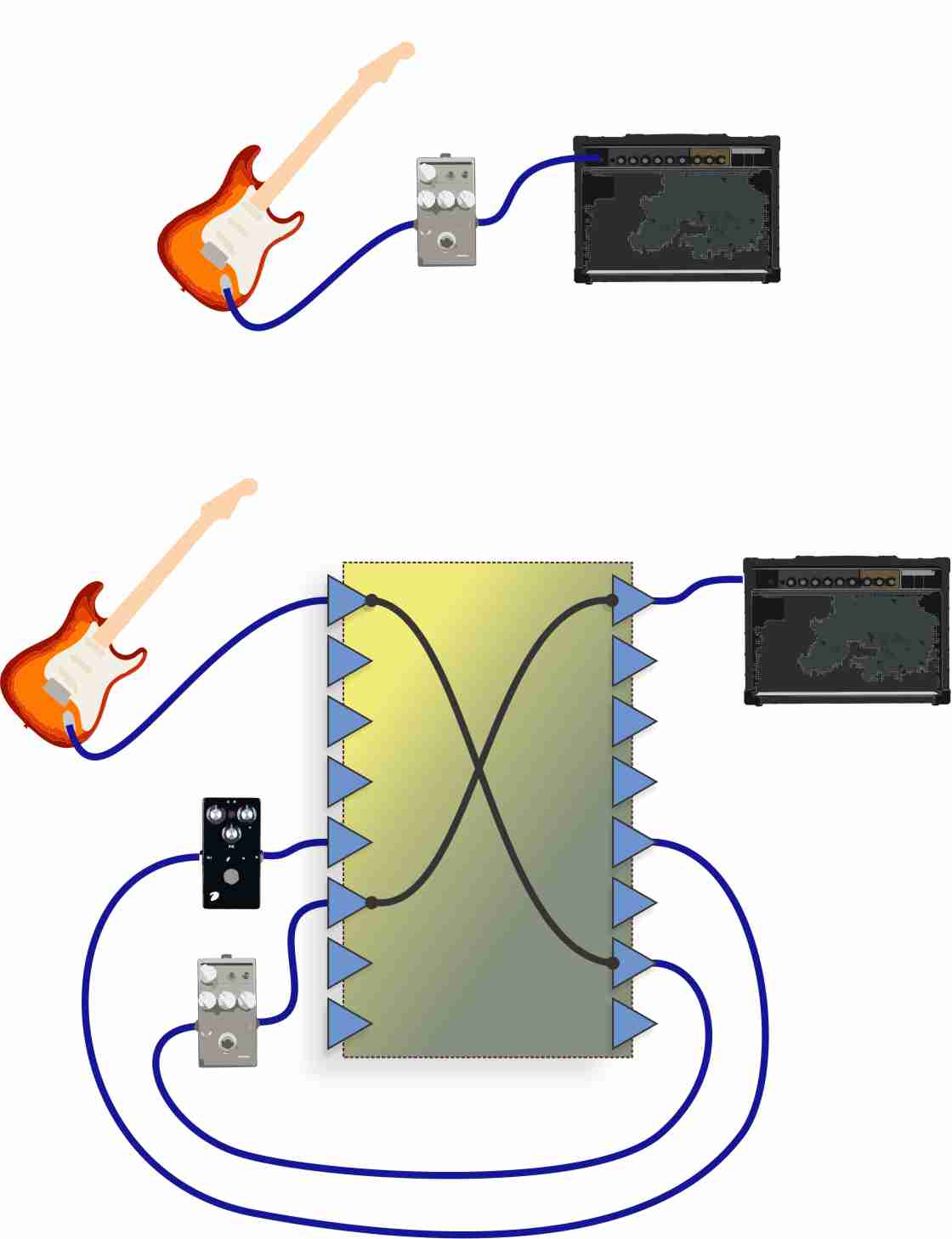 With the matrix’s ability to both distribute a signal to several outputs and to mix, it is a simple matter to mix the two effects in parallel as shown here.

In the ultimate system we also have the freedom to set levels at each connection to get the exact mix we want and the Switchblade has this ability.  In this preset we do this by setting the input to the second effect at -6dB to reduce the drive going to this effect (which might be a distortion pedal), to reduce the amount of drive in the distortion.  We will also set the output of the first effect which might be a delay pedal at -9dB so the delay sound is lower than the distortion volume. 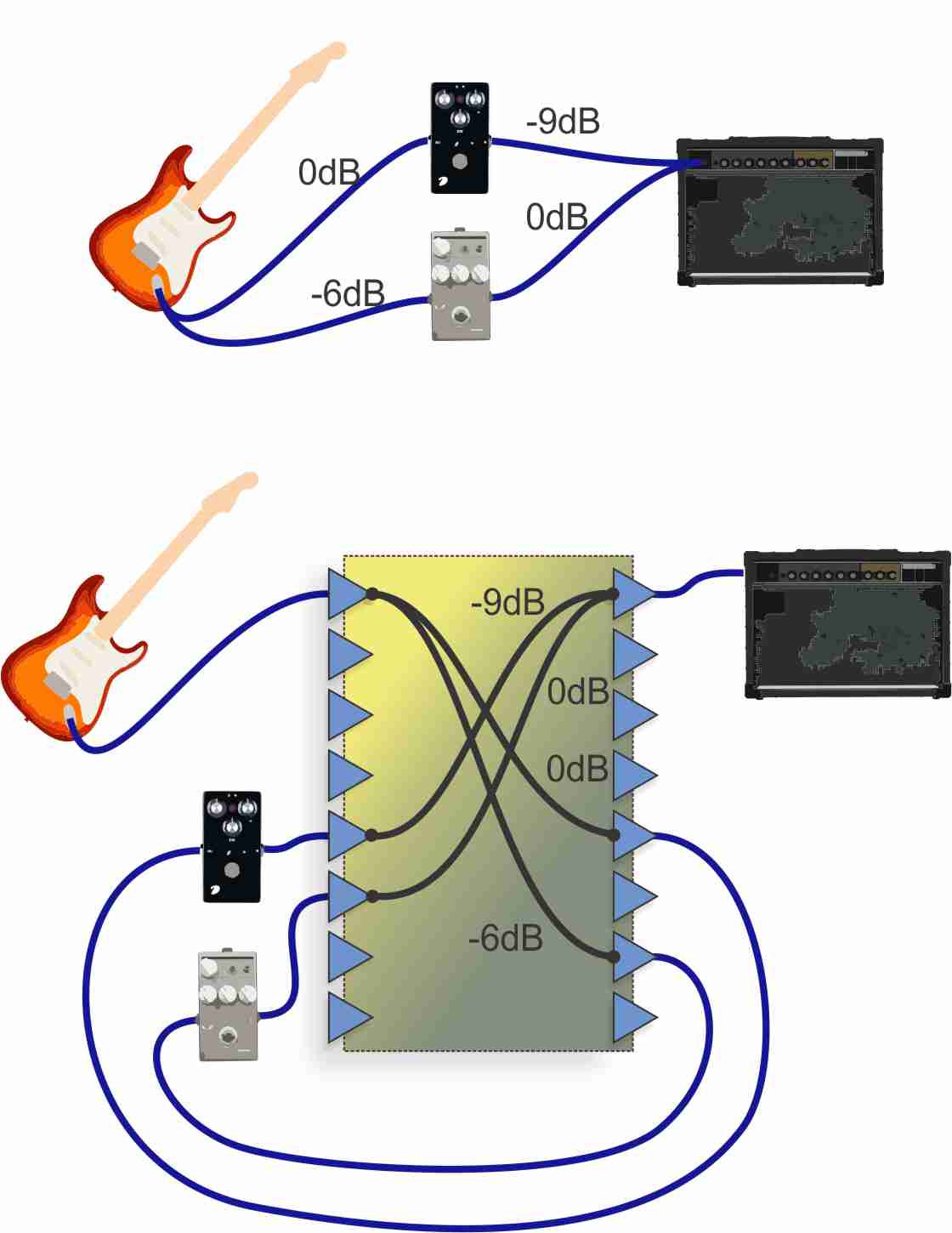 For this next preset the Switchblade will create 3 connections in the matrix to connect 2 effects in series. 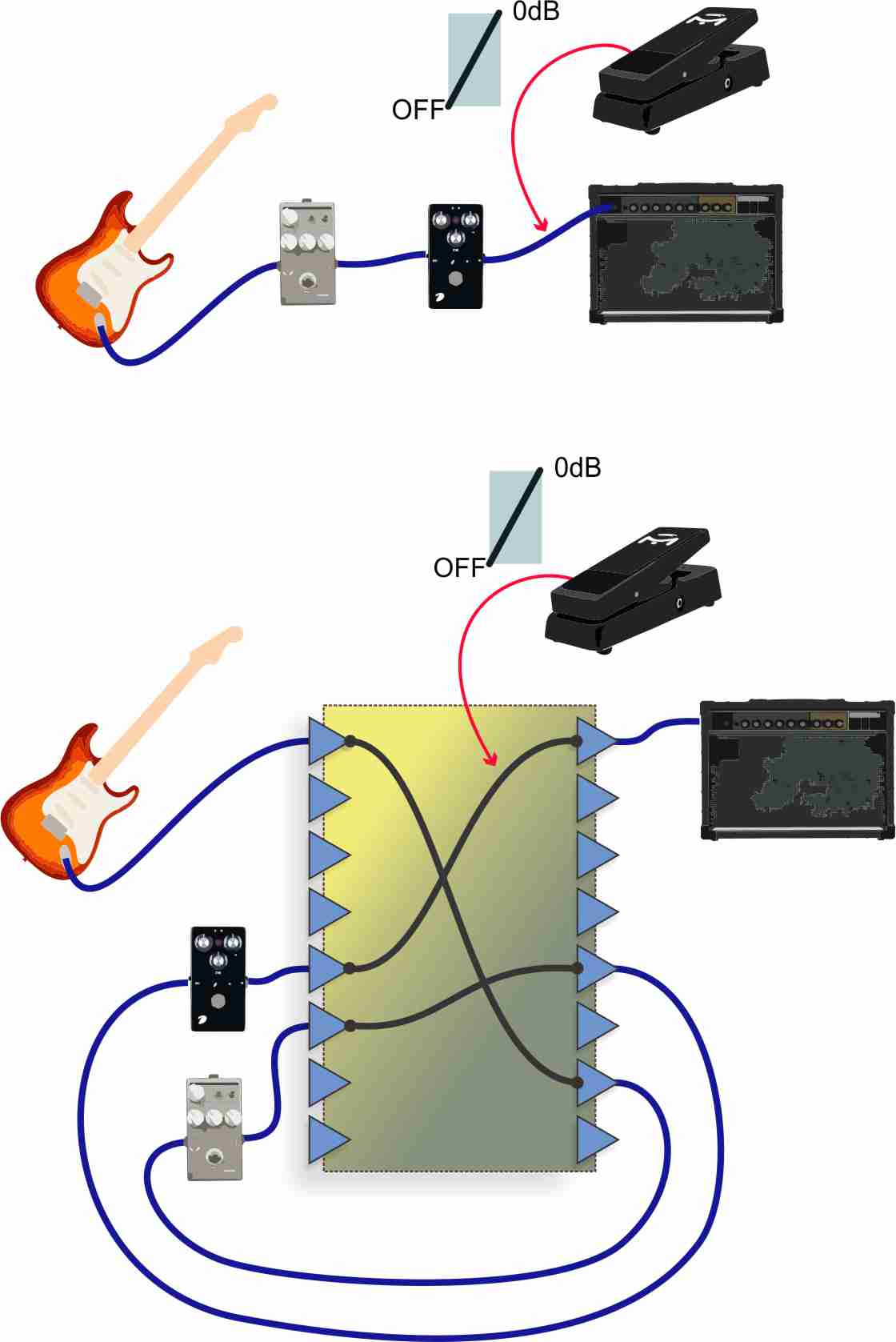 We can change the order of effects just by changing the routing in the matrix and assign the expression pedal to any connection or to several connections simultaneously.

Almost all other switching systems have a single input for your guitar and a single output for your amp restricting you to one instrument and one amp.  The Switchblade on the other hand has no such restrictions.  Instead you can connect any number of instruments, amps, effect loops and so on using any of the inputs and outputs.  Just connect everything you have and be done with it!

All inputs and outputs on the Switchblade are buffered using leading edge components for extreme purity.  Buffers have tremendous advantages.  Buffers on the input mean the sensitive pickup on your instrument won’t get loaded down leaving you with the sibilance and chime your guitar longs to share.  Having input buffers has the added benefit of being able to split the signal up to route to several destinations without any change to what the gear on the input sees. The buffers on the outputs overcome the capacitance and inductance inherent in all instrument cables and outboard gear leaving you with a clean path for your signal everywhere in your system.  Having output buffers also allow signals from various inputs to be mixed together without degradation that can happen in passive systems.

In fact, the entire audio pathways in the Switchblade have been engineered with performance and quality in mind. The wide frequency response, high signal to noise ratio, low distortion and phase properties allow crystal clear passage of your instrument’s sound through your effects, and because the matrix offers point to point connections, all of the bypass relays found in other switching systems are eliminated.  Where you might go through 15 relays in another system to connect your guitar to your amp, the Switchblade routes the guitar signal directly from the input buffer connected to your guitar to the output buffer connected to your amp eliminating the long tone sucking pathway found in other systems.

Such a powerful system might seem intimidating, but with the Switchblade, it is simple and intuitive to create a preset.  All inputs and outputs are given names when you first put your system together, then after that all you need to do is select a preset you wish to program and connect everything by name such as GUITAR to OVERDRIVE, then OVERDRIVE to AMP to create a preset with an overdrive connected between your guitar and amp.  All connections are created this way. Nothing could be easier!

The Switchblade allows you to store a lot of presets, any of which can be loaded instantly by MIDI Program messages. An advanced switching algorithm offers the most musically transparent switching of any system available, utilizing an intelligent analysis so that any patches that are the same between the two presets are left untouched for glitch free operation. And whether you need instant switching or long blends, the Switchblade will meet your exact needs. Switching time is programmable from zero to 1000 ms.  With longer times the signals ramp down and up for new patches or make smooth gain sweeps if the patch remains the same.

The matrix and gain elements in the Switchblade can also be controlled directly using Sys-Ex messages in situations where you prefer to route effects on the fly without having to go to a preset. This is useful in the Studio where you need to have your sequencer control all routing and gain settings.

The Switchblade not only responds to MIDI Program Change and Control Change messages, but can also be set to transmit Program messages to other MIDI gear whenever a preset is selected. This greatly simplifies synchronizing your gear and is a great aid when using the Switchblade with simple MIDI controllers that can only transmit one Program message as a time. 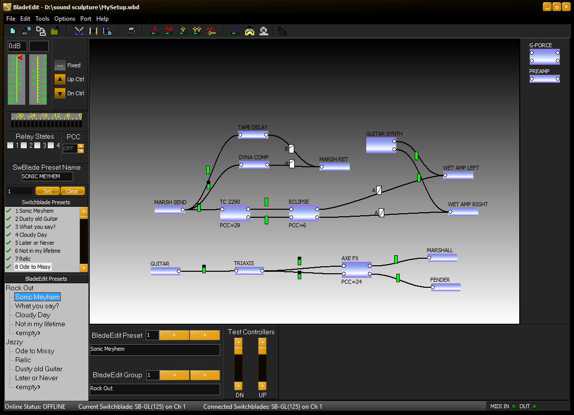 Although a preset on the Switchblade is easy to create from the front panel, for power users needing to create libraries of presets, we offer a great FREE editor called BladeEdit. This high level graphic interface makes it easy to connect all your gear together, set levels and assign controllers just by clicking.

BladeEdit is available for Mac and PC from our website and you don’t need a Switchblade to fire it up and try it out! Check out the detailed BladeEdit page for more information about this amazing app.

The Switchblade saves wiring schemes as presets, but with the Switchblade’s Smart Insert feature you have the freedom to remove and re-insert effects into an existing preset or select instruments or amps to experiment with different combinations.  The “Smart” part comes in when you remove an effect.  This feature will reroute the remaining effects in a predictable manner so you get the sound you expect. The “instant access” switches (MIDI Control Change messages) on your foot controller are assigned to individual effects, instruments, or amps to use this feature.

An internal "Auto Sweep" function can be used in place of one of the controllers for hands off automatic sweeping. Several different Auto Sweep functions are available with adjustable times to over 12 seconds. The Switchblade also incorporates an exclusive circuit we call "Seamless Sweeping" to remove zippering noise when used with even low resolution continuous controllers. An intelligent algorithm monitors each input signal and only allows gain changes during zero crossing times, effectively removing the steps that create zipper noise.

Throw out your footswitches! The Switchblade can connect to your amps channel or reverb footswitch input giving you the power to switch these functions when you select presets on the Switchblade or on the fly from your MIDI foot controller.

The Switchblade also has LFO (Low Frequency Oscillator) controllers that can be assigned to connections in the same way you can assign expression pedals.  This feature allows your pedals to morph around each other in slowly changing sounds giving you additional sounds that changes with time.

All Switchblade models also have a VU bar graph menu allowing the user to select and monitor the audio levels (in dB) of the individual inputs. This metering function can also be sent out in real time over the MIDI OUT port for computer programs that can monitor such activity. With the ability to monitor the input levels, maximum signal to noise ratios can be achieved and headroom can be monitored carefully when required.

A switching system is the heart of any rig and must be built with reliability and durability in mind.  Each unit is visually inspected after building and thoroughly tested before it’s shipped and we use only the highest quality components in our products.  A look at the community of professional players and artists who depend on the Switchblade serves as evidence towards its quality and reliability.

The Switchblade's high integrity audio paths and MIDI capabilities give it tremendous capabilities in the studio environment. As an advanced patchbay, it allows routing "on the fly" with Sys-ex from your sequencer or control surface. Separate commands are available to clear the entire matrix, create and delete individual patches and assign controller numbers to each patch. In fact, when used in this fashion, each individual connection can be assigned 2 controller numbers (a linear curve and a log curve) allowing both panning and gain change using the pan pot and graphic faders of your favorite software or hardware control surface. As with preset changes, all remote switching commands are handled intelligently to insure glitch free operation. With this power to instantly patch all audio signals in your studio and control individual gain levels as well, your entire studio can be fully automated.

To learn about the Switchblade rack systems continue on!