ARTISTS WHO USE SOUND SCULPTURE GEAR

John Paul Jones (Led Zeppelin)
(3/28/2018) The legendary Led Zeppelin bassist never stops creating and will be performing with his brand new band Snoweye this summer. Get the details here: www.johnpauljones.com/news.html

I met John at a Zooma sound check many years ago and I think he is one of the coolest people I have ever met. What a humble and generous man! John has been using the Switchblades in his rig for many years now for selecting and mixing his wide array of musical instruments and effects.

Tomo (30 Seconds To Mars)
(3/28/2018) 30 Seconds To Mars is currently on a massive world wide tour and you don't want to miss this band when they come to you. Their relentless level of energy can shatter the molocules in your body (in a good way!) I'm very happy to see they will also soon be releasing their newest album "America". Tomo uses our Switchblade GL systems and we are very happy that he does. Are you ready to rock? Check out the tour dates here:  www.thirtysecondstomars.com 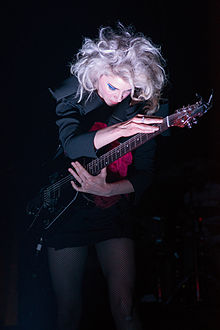 (3/28/2018) Annie's 5th album "Masseduction" is now out to critical acclaim and currently St Vincent is in the middle of her extended "Fear the Future" tour. This popular avant garde artist reaches levels of creativity that sometimes boggle the mind.  Her originality landed her a Grammy in 2015 for "Best Alternative Music Album" and we are very pleased she has chosen to use a Switchblade 8F on her floorboard system.  See tour dates at www.ilovestvincent.com 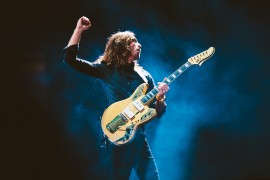 Imagine Dragons released "Smoke and Mirrors" in 2015 reaching #1 on the US Billboard Chart, the UK Albums Chart, and the Canadian Albums Chart. Guitarist Wayne Sermon uses his Switchblade GL to take his stunning guitar lines to extreme heights.  You can catch an interview of him talking about his guitar rig, amplifiers, and the GL in this video produced by Premier Guitar Magazine:    Wayne Sermon Interview

Dweezil Zappa
Check out those pants!  Dweezil created the massive Zappa Does Zappa tour about 3 years ago and continues with this tour as I write as a never ending tribute to his father's music.  Recreating Frank's sound and music with utmost attention to detail has been Dweezil's goal and dream from the start and he uses Switchblade GL systems to integrate all of his father's original gear to do just that.  I was lucky enough to catch his show in SF and Portland and was just astounded.  Catch more atwww.zappaplayszappa.com

Colin Meloy (The Decemberists)
(3/28/2018) Capital Records artists The Decemberists are now on tour behind their new release "I'll Be Your Girl" and genius songwriter and frontman Colin Meloy, has made the Switchblade GL a part of his touring rig to handle the wide variety of sounds required to accurately re-create songs from their albums. Check touring dates at www.decemberists.com

Dave Matthews (Dave Matthews Band)
The DMB is in the middle of yet another full year of touring across the entire mid and eastern US.  Who knows how they do it, but it's a testimony to the ruggedness of the gear they use.  Dave chose the Switchblade GL to handle all of his instruments on stage and we couldn't be happier that he did.  Watch for the new album Big Whiskey and the Groogrux King, slated to be released on June 2, 2009.www.davematthewsband.com

Robert Fripp (King Crimson)
The man... the legend... the soul of King Crimson. Robert uses several Switchblade GL systems in his US and European stage racks.  Need we say more? Visitwww.elephant-talk.com for more on this genius musician.

Trey Gunn (King Crimson)
King Crimson's heralded Stick player. Trey used one of our earlier switching systems, the MC-8, then later bought a  Switchblade 16 when it became available which he has been using ever since.  I saw King Crimson perform in Denver and never in my life have I experienced such a complex force of pure musicianship. Many thanks to Trey for his contributions to the product design of the Switchblade. Check out his killer web site atwww.treygunn.com

Radiohead
Radiohead has just finished up the first leg of their world tour which will wrap up in August after a short hiatus.  This group uses many Switchblade GL units and we're not sure who in the group is using what, but maybe they like to share.  We caught some footage of their studio racks and Switchblades in the VH1 documentary about this mysterious and creative band.
www.radiohead.com

Steve Rothery (Marillion)
Marillion have never been as big in the US as they are in Europe, where they are as huge as the universe. Only after I saw them live in Denver did I realize what a void there had been in my musical perspective. Steve used the MC-8 for many years and became one of the first Switchblade owners.  www.marillion.com

Chris Wolstenhome (Muse)
The fierce and intense sound of Muse Bass player Chris Wolstenhome is a product of his remarkable talent, but we are glad to see that he also depends on his Switchblade GL to help him out.  You can see it here:
www.liquid-fire.co.uk/musegear/chris.html

John Czajkowski (Hectic Watermelon)
I love it when I come across new music that is wholly new and creative but possesses elements of the finest musicians of the past that I have always loved.  Hectic Watermelon creates such music.  Heavily influenced by Mahavishnu Orchestra, but reaching places they never got to, HW takes me to vast new places.  John is a serious sonic technician and musician and does things with his Switchblade GL I'm sure no one else even thinks of trying.  Their most recent release "The Great American Road Trip" features Mahavishnu power violinist Jerry Goodman and is simply a masterpiece.  More atwww.hecticwatermelon.com 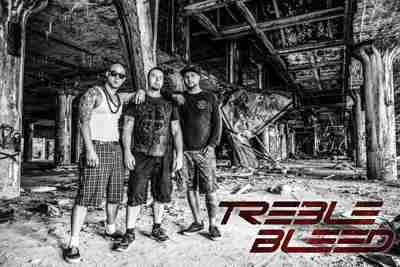 Rob Singleton (Treble Bleed)
(3/28/2018) Treble Bleed is a project out the depths of Detroit's musical melting pot. This band prides itself in taking a diverse approach crossing a variety of genres and as a result elements of the bands style collide creating an emotional intensity and a carpet bombing of the senses. Rob's elaborate  video / audio / sequencing rig utilizes Sound Sculpture elements throughout with the Switchblade GL being an integral part of making their unique stage show flow seamlessly. Check them out at www.treblebleed.com

Paul Crook (Anthrax)
You may know Paul from his work with Anthrax, but this talented multi-faceted guitarist just finished up The "We Will Rock You" tribute show playing with Meatloaf and Brian May.  Meatloaf is now currently touring throughout Europe.  Be sure to catch them live.  You can see his Switchblade GL and read about everything this busy guitar player is doing at:www.metalloaf.com

That 1 Guy
There is no artist quite like Mike Silverman a.k.a. That 1 Guy.  This extraordinary "must see" hi-energy performer has created an instrument that you have to see (and hear) to believe.  When he plays, the whole place gets up and dances.  Mike uses a Switchblade GL to integrate all of the multiple sounds created by his amazing invention.  Learn more at: www.that1guy.com

Jerry McPherson
Jerry McPherson of Nashville is without a doubt one of the most sought after session guitarists anywhere.  His list of credits would take you hours to read.  Having recorded with Amy Grant, Reba McEntire, Curtis Mayfield, and more this insightful, intuitive, super talented guitar player is an icon in the business.  Recording Magazine selected him as one of the two top session guitarists in the country and we're very pleased to hear Jerry depends on his Switchblade GL for everything he does.  Read about his philosophies and his rack system:Part1,Part2, and Part3.

Roger Hodgson (Supertramp)
The renowned singer for the timeless supergroup Supertramp uses a Switchblade. You can catch Roger's next appearance on November 30, 2005 in London.  More on Roger atwww.rogerhodgson.com

Don "Buck Dharma" Roeser (Blue Oyster Cult)
The master guitarist behind Blue Oyster Cult. I have been a huge fan of BOC and especially of Buck's neural shattering guitar work ever since a friend turned me on to the first BOC album over 20 years ago. I considered it a great honor when Buck chose to use our MC-8 switching system as his system of choice several years ago in his touring rig. He later upgraded to a Switchblade 16. Look up their website and see this band! www.blueoystercult.com

Ethan Brosh
Imagine Vai, Satriani, J.S.Bach, Sabbath, and DiMiola all coming together in a single mind and you have Ethan Brosh.  This artist doesn't play games and has his craft down to that of a precision watchmaker.  His newest release "Out of Oblivion" reflects all of this.  This powerful production is nirvanic and I've found myself not knowing where I am when listening to it.  One needs to listen to this with caution. Ethan uses the Switchblade GL.  www.ethanbrosh.com

Faisal Moro
... has this to say about his Switchblade GL. "The first impression is absolutely positive...Really unbelievable. Sound is now clear, defined, in-phase, and can be controlled in real time. Quality is fantastic.  Great great great!" Thanks Faisal for the kind words.

Mikail Graham
Mikail is best known for his guitar playing with Roger Hodgson's Rites of Passage project. Mikail uses the Switchblade and can be found saying some very interesting things on his radio show.

Bruce Odland and Sam Auinger
This duo use the Switchblade for their large scale public sound art installations in Vienna, Berlin, Nice, Benaris, India, Linz, Zurich, and New York. Says Odland "For creating multi-speaker output arrays from mountaintops, temples, clubs and plazas nothing matches the compact size, programmability, and flexibility of the Switchblade". Thanks Bruce!

Chris Squire (Yes) 1948-2015
We are deeply saddened by the loss of one of rocks very greatest bass players.  I personally was enchanted by his deeply melodic bass lines and his innovation.  Chris was one of our earliest customers and we are so grateful for the support he gave us and for all the great shows.  The legendary Yes bassist used a Switchblade in his stage rig. If you are not familiar with the work of Yes, take the time to check out some videos of this legendary band and visit www.chrisquire.com to learn about this exceptional artist.

Walter Becker (Steely Dan) 1950-2017
The soul of Steely Dan since their inception, losing Walter is a deeply felt loss. I saw Steely Dan during their 2003 and their Denver show was one of the most amazing shows I've ever seen.  The sound was perfect from the first note and the performance was beyond belief.  Walter used a HeadTrip for the entire tour to switch between his stage amps to get his flawless sound.