THE ABYSS - THE WORLD'S MOST ADVANCED A/B BOX

The Abyss - An A/B/Y type amp switcher with superpowers - destined to be the professional’s choice.  The Abyss is about Control and Tone.

Control - The Abyss allows you to select either or both amps, kicks in boost up to 18dB, and lets you change amp levels on the fly.  It's fully MIDI capable with fixed gain settings and MIDI controlled volume and panning. Combine units to control up to 8 amps. 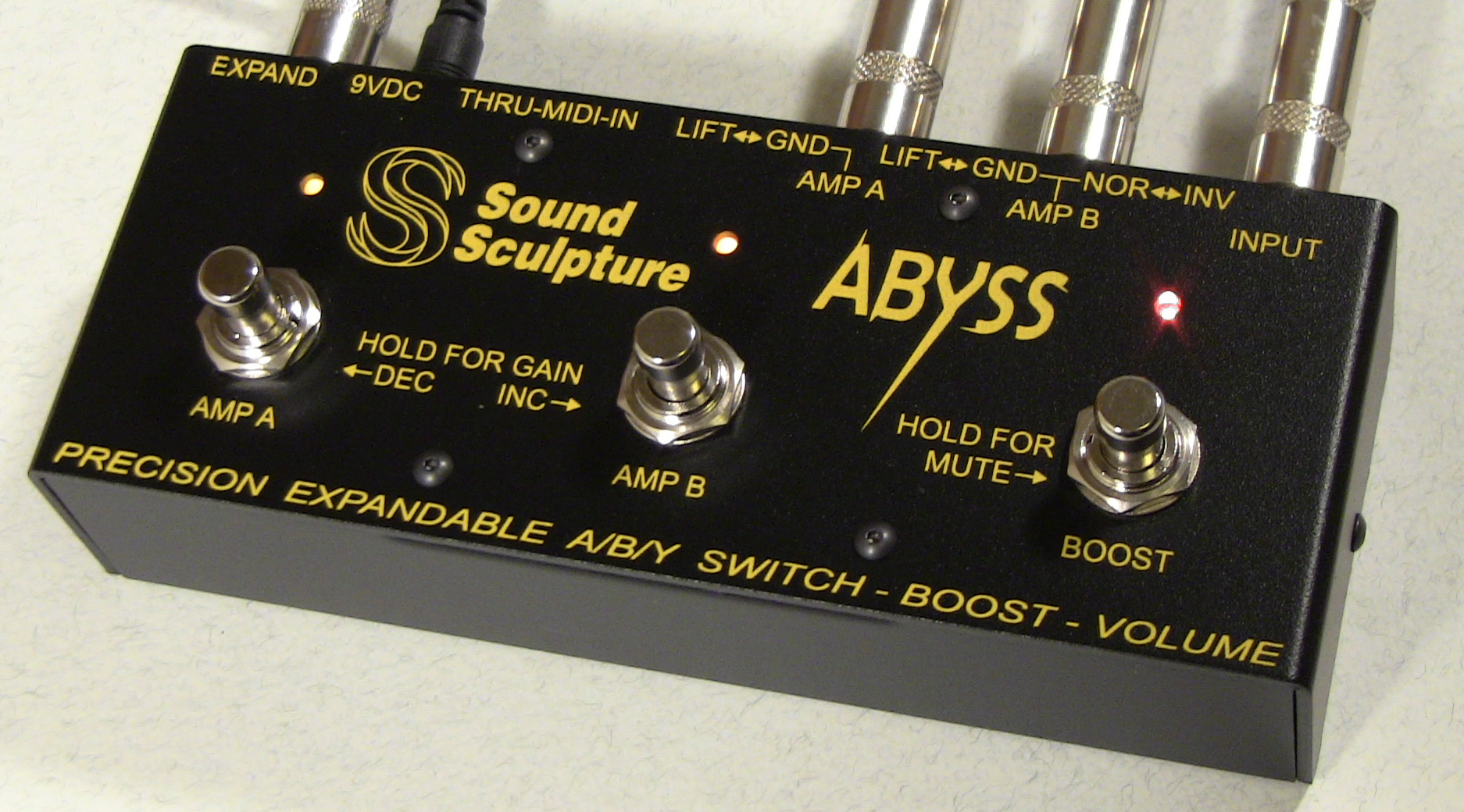 Check out the video, read the specs, then order your Abyss today!

SO WHAT IS AN A/B BOX ANYWAY?

‍Glad you asked!  If you're a guitar player, you know your amplifier has a certain beautiful tone that you've come to love.  Amps are often identified by their unique tone.  If you have more than one amp, you can switch between these tones.  The tool used to do this is commonly called an "A/B Box" and there are several to choose from.  All do basically the same thing and little else.

‍The Abyss on the other hand takes the concept of amp switching to a whole new level.
‍
‍As indicated in this animation, in a common A/B box, the audio is abruptly switched from one amp to the other which can result in a harsh "pop" sound leaving you apologizing to your audience.

WHAT MAKES THE ABYSS SO DIFFERENT?

Switch between Amp A, Amp B, or both, cleanly with no pops even while playing!

‍As shown in the animation here, when switching between amps or engaging the boost, the transition is always clean with no pops.

No other A/B Box has this feature!

KICK IN UP TO 18dB OF BOOST (THAT'S A LOT!):  Sometimes, you need to kick in a little extra volume (during a solo for example) and the Abyss has you covered.  At the press of a switch you can kick your amps into overdrive to cut through loud and clear!  To add this to any other A/B Box you would need to buy a separate Boost pedal.

ADJUST LEVELS OF AMPS WHILE PLAYING:  Simply by pressing and holding either the Amp A (decrement) or the Amp B (increment) switch, you can change the level of the amp you are playing through.  When in normal (non-boost) mode you can adjust the level of Amp A or B independently from -18dB to 0dB (0dB is unity gain).  If both amps are selected, the levels in both amps are set to the same level and will change together.  When in Boost mode, you can adjust the levels from +1dB to +18dB.  All 6 amp levels that you last set are remembered even when powered down.
‍

‍Many modern guitar setups are controlled from one central "foot controller" that transmits control signals to guitar effects to tell them what to do.  This technology is called "MIDI".  The Abyss is MIDI ready and all major functions such as selecting amps, setting levels, activating the boost and more can be controlled from a MIDI foot controller or computer that transmits MIDI to control the Abyss from your favorite audio editing program

One of the most exciting features of the Abyss, is having the ability, using an expression pedal connected to a MIDI foot controller, to sweep the volume in real time of the selected amp(s).  The sweep goes from off to the current level you have set by the switches.

When both amps are selected you can also use the expression pedal to pan between the two amps.  The pan is automatically disabled when the same or another program is selected until you move the expression pedal again to keep the pan out of the way when not needed.One cool thing you can do with panning is make a simulated wah pedal by setting one amp to a deep bass sound and the other to just treble.

‍The Abyss can be expanded by connecting the EXPAND output of one unit to the INPUT of the next unit.  The interconnecting cable carries both the audio signal and a bi-directional control signal to allow the units to talk to each to each other. 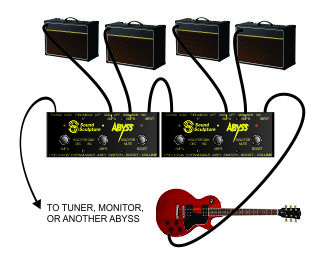 ‍GROUND LIFT CAPABILITY:  Not just one, but two ground lift switches are available to float the ground of either or both amps.  The reason ground lift is important is because connecting an instrument to two amps can result in an annoying "hum" sound caused by what's called a "ground loop".  Only a few A/B boxes on the market offer any kind of ground lift solutions, and of these all offer ground lift on only one output.  In addition all use a transformer to isolate the output.  This can result in distortion and low end rolloff.  Only the Abyss offers transformer-less ground lift and uses a superior technology called Servo Balanced Outputs, a fancy name but the only way to go if you want to keep your pristine tone without rolloff.

‍PHASE SWITCH ON AMP B:  When playing through 2 amps at the same time, if one amp is out of phase (speaker wires reversed for example), the result can be a thin sound.  The Abyss can reverse the phase of the B amp to get your amps back in phase for the full thickness playing through two amps can bring.

‍LEDS TO INDICATE GAIN LEVEL:  The LED indicators above each amp switch change color to reflect the level of the signal going to the amp.  The color changes smoothly from green when at -18dB, through yellow at 0dB, and into red for +18dB to give you an immediate indication of the signal strength going to the amp.

‍THE STORY BEHIND THE ABYSS: The driving idea behind the Abyss was to meticulously design the very best and most versatile A/B Box on the planet:   The Hubble Space Telescope of A/B Boxes. Guitar players have suffered long enough with inadequate tools to switch between amplifiers and we wanted to create what guitarists have been craving, an A/B box that matches the high standard of quality that is expected from pro players. 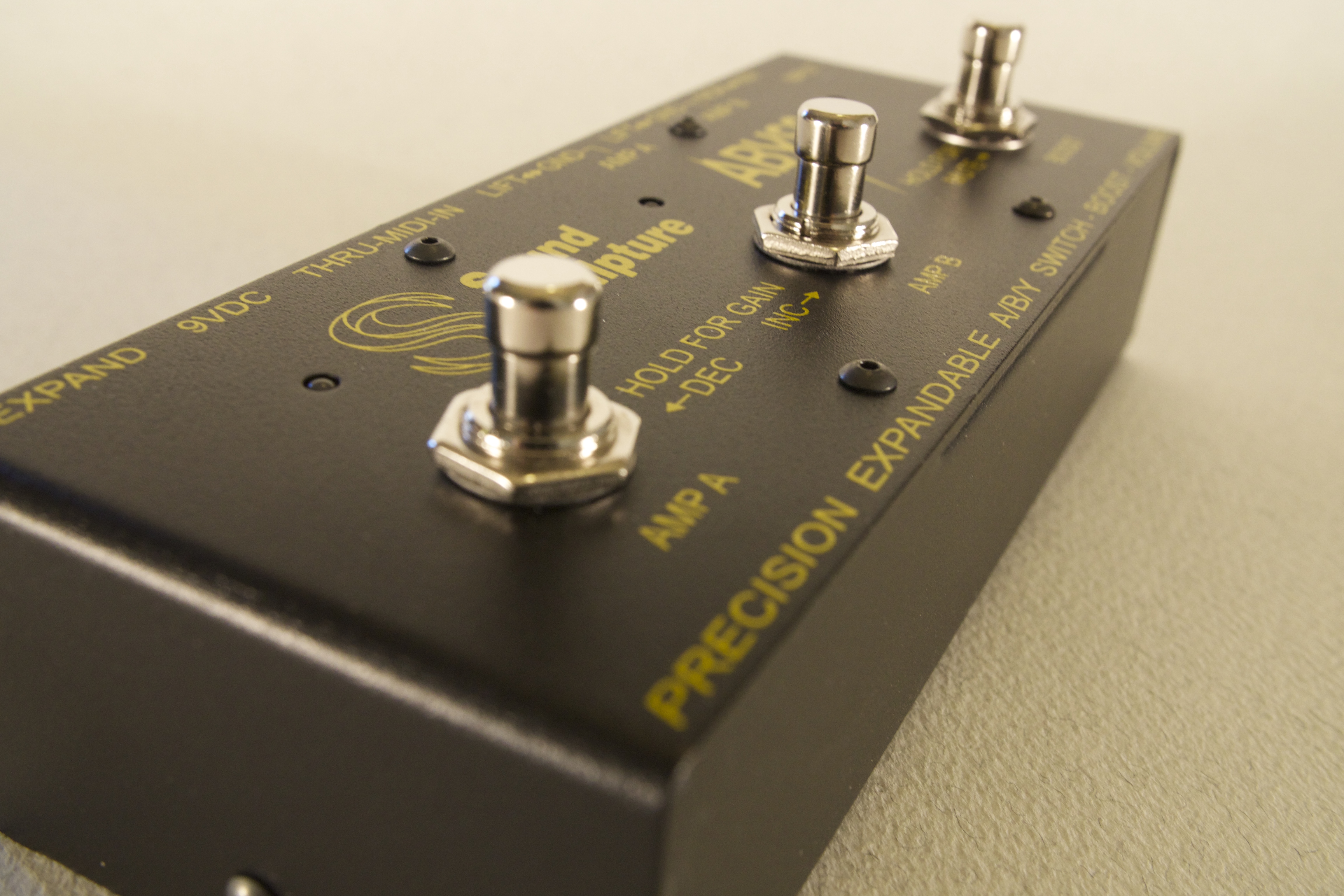 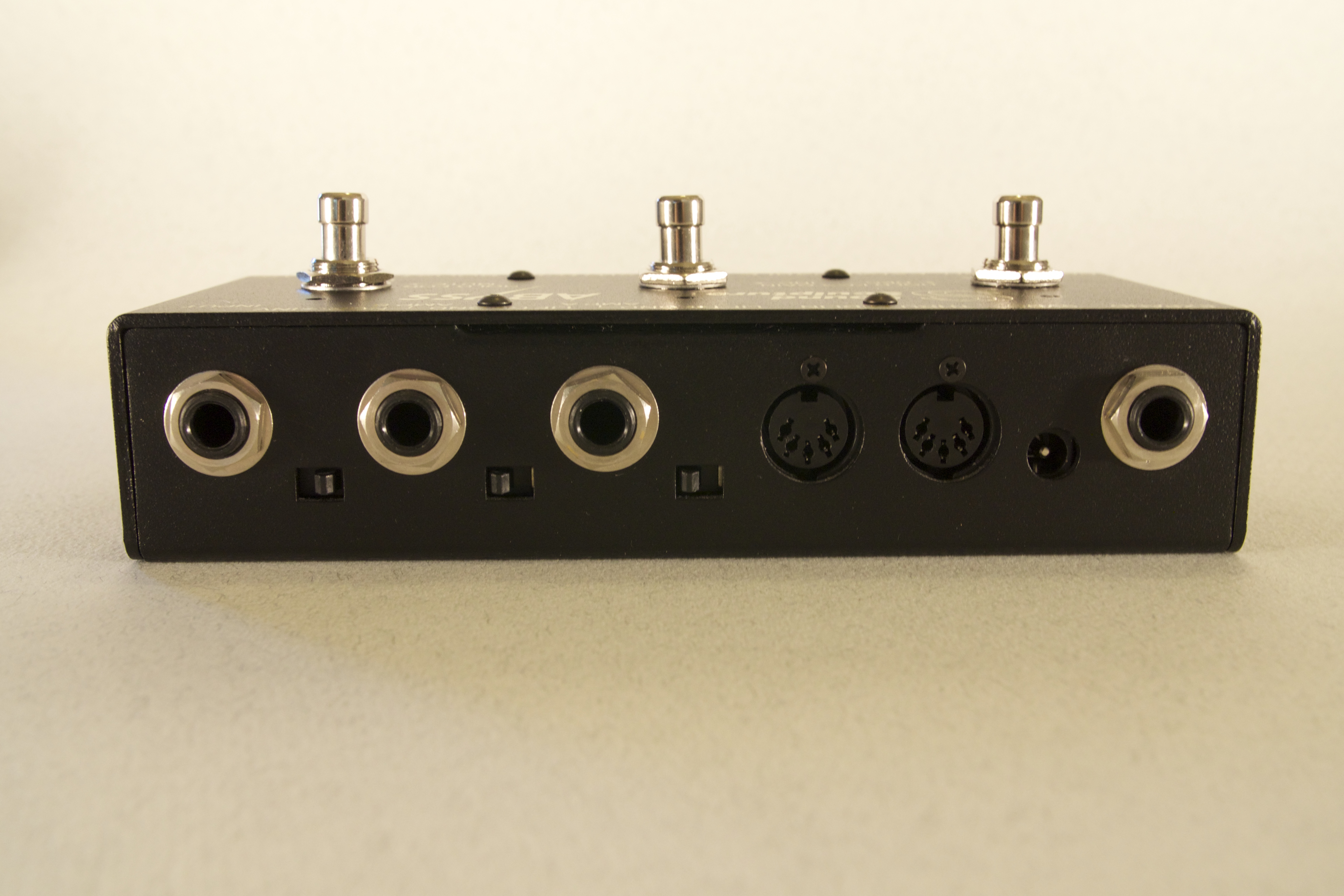 ‍For those that like looking at cool specs, here are some actual oscilloscope pictures of how the Abyss compares to a typical A/B switch.  If you don't like geeky stuff, you can jump over this part.This image shows the sound at the "B" amp that a typical A/B box makes when switching from A to B.  As you can see, a loud pop is heard in the speaker because the switching happens through a mechanical switch.  If you look closely, you can also see the switch bounce noise at that same time.