If you've been looking for a way to include AB Switching in your midi controlled guitar, keyboard, or effects rig, look no further. The ABCadabra (pronounced "A/B Cadabra") is a midi-controlled relay-operated audio AB switch which can be used to connect your instrument to either of 2 amplifiers or to both amps together. The device can alternately be used as a true bypass mono effects loop, via a stereo to dual-mono cable. In this mode it allows the use of midi to insert or bypass an effect allowing direct connection between your guitar and amp when the effect is bypassed. The ABCadabra can also be used to select among two signal processors into a single amp when connected in reverse. 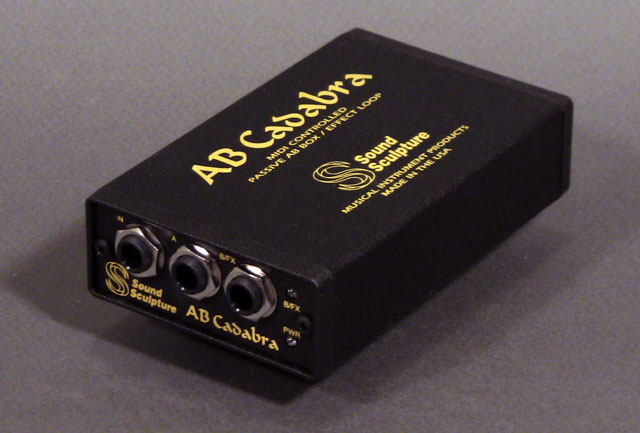 The ABCadabra does all switching with fast relays to make the audio connections so there is absolutely no modification of the audio signal. This makes it the the ideal device for tone purists who demand direct connections between guitar and amp when bypassing effects or switching between amps. Midi control is realized via both Program Change commands as well as Controller Change messages found on most modern MIDI controllers.

When used in AB mode (A, B, or Both), the Common Jack  is used to connect to the instrument and the A and B jacks are used to connect to the two amplifiers. When used this way, the output that is shut off is shorted to ground so there is no noise coming from the unused amp. In this mode of operation, the device can also be used to switch multiple instruments to one amp, or in any other number of configurations.

The B/FX  Indicator illuminates if the effect is inserted, or if the COM and B/FX jack are actively connected.  This indicator also blinks momentarily when the unit receives a valid MIDI command that it has acted upon to indicate a MIDI signal was recognized.

The Power Indicator lights when DC power from the module is applied.

The MIDI In Jack connects to a standard foot controller or the MIDI data stream.

The MIDI Thru Jack passes all MIDI data through undisturbed.

The Power Jack connects to the supplied power module and operates at 9V DC @ 100ma with the center pin positive via a 2.1 mm jack.

The ABCadabra can be controlled either by MIDI Program Change commands or by Control Change "on/off" commands (sometimes referred to as Instant access switches) as are found in most of today's MIDI foot controllers.

There are pre-defined Program Messages used to select between amps, for both amps together, for inserting or bypassing an effect, or for selecting between 2 effects devices. Pre-defined Control Change messages perform similar operations. The list of Programs are extensive and there are programs which can be allow a single switch to alternately select between amps, another to perform a 3 way (A, B, or Both) operaion another to make use of 2 or 3 separate switches to definitively go to A, B, or Both instead of rotating and so on. There is a MIDI Program message for any possible scenario.

When used as a MIDI CONTROLLED AB BOX, standard patch cables are used.  Connect the guitar or instrument to the COM jack, and attach the amps to the A and B jacks as shown here.

When used as a MIDI CONTROLLED EFFECTS LOOP INSERT/BYPASS connect the guitar to the COM jack, the amp to the A jack and use an insert cable (stereo to dual mono) to attach the signal processor to the B/FX jack. The mono plug that is connected to the tip of the stereo plug is inserted into the input of the processor and the one connected to the ring is inserted in the output of the processor. In this way, true analog bypass of any effect is made possible.

When used to select effects, connect standard instrument cables between the two processors and the A and B/FX jacks.  Connect the amp to the COM jack.